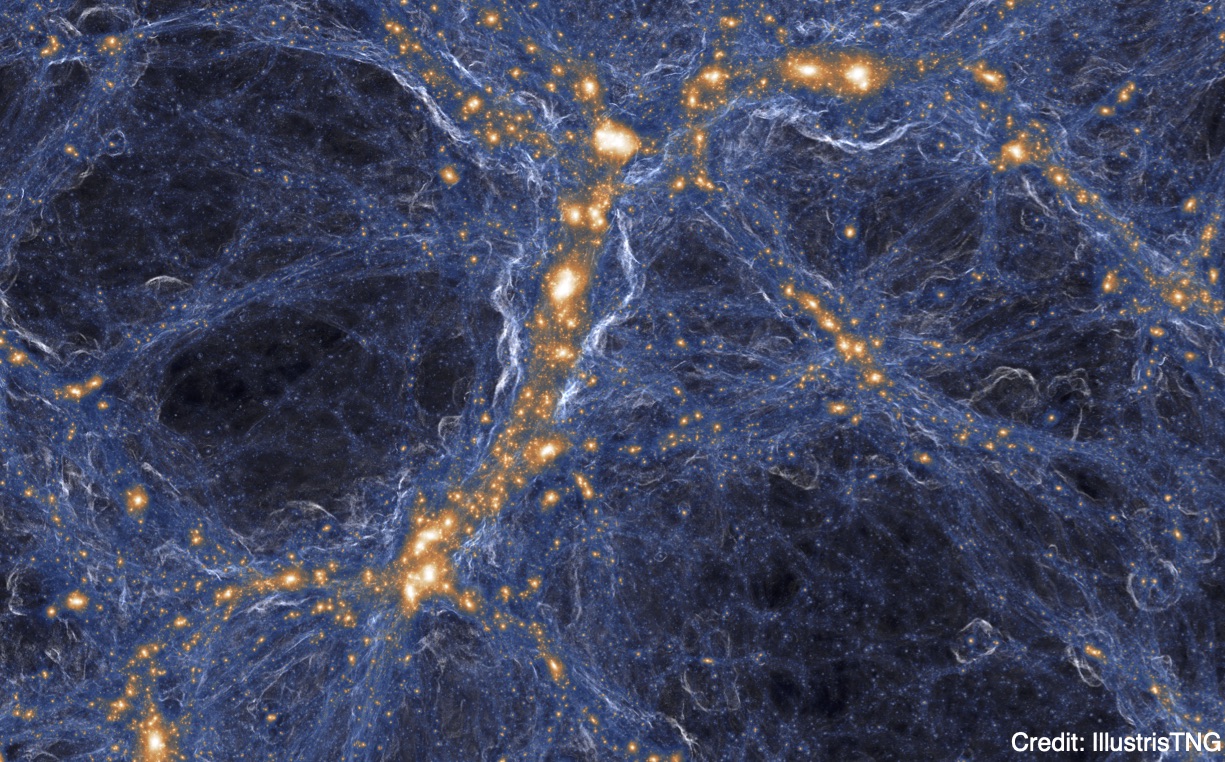 I am primarily interested by how structures in our Universe came to be, and in particular how this process helps us answering fundamental physics questions such as what is our Universe made of? what are dark matter and dark energy? where do we come from? These questions have led me to study and probe the connection between visible and dark matter, using both analytical, numerical and statistical models. My main findings are summarized below, all my publications are publicly available on arxiv and referenced on NASA ADS. 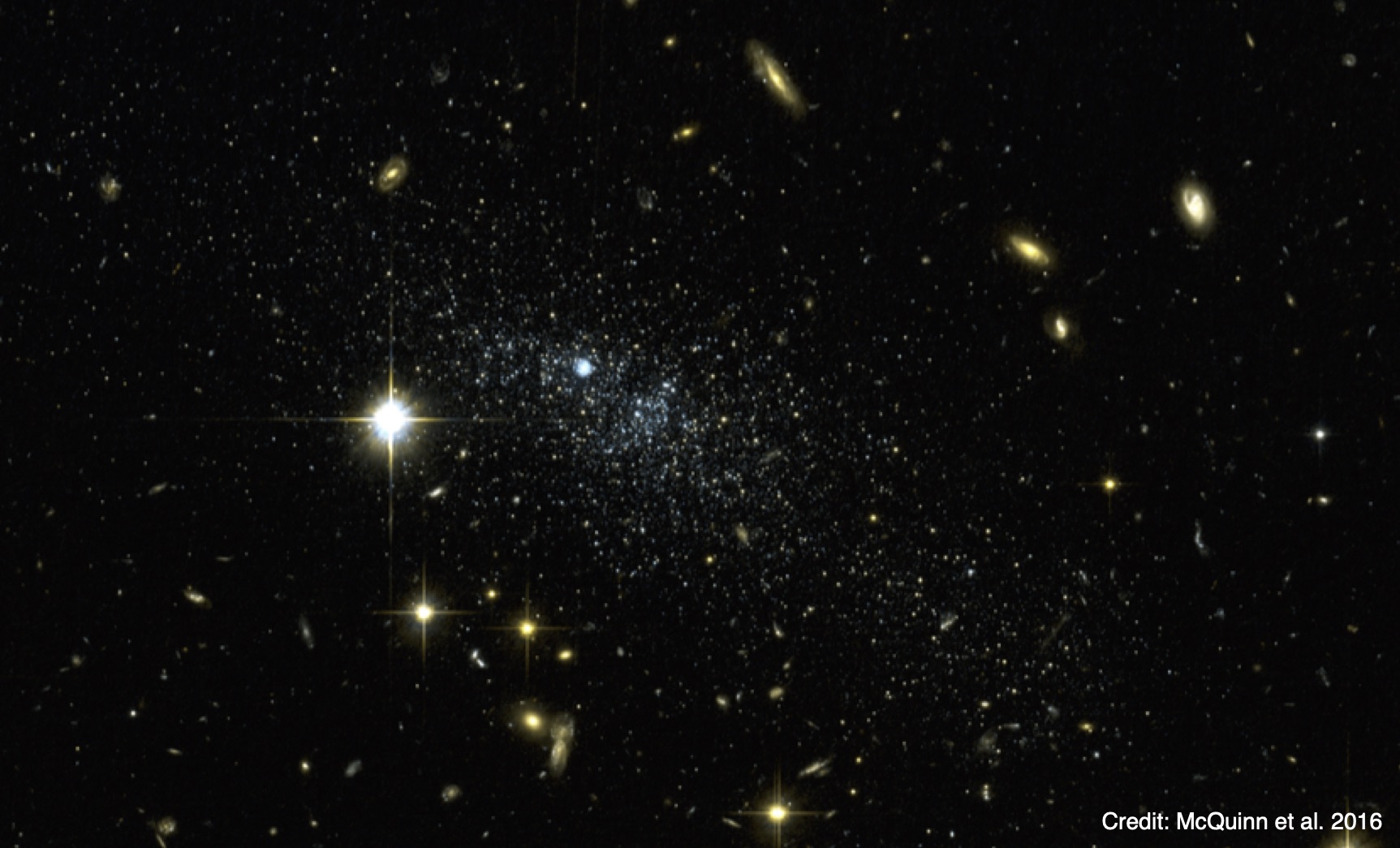 Small, very faint dwarf galaxies are typically observed without traces of recent star formation - most of their stars were born 10 billions of years ago before the Universe was heated by its accumulating starlight. A growing number of exceptions to this scenario have been noticed however; but how galaxies such as Leo P (picture above) and Leo T have managed to sustain the formation of new stars until the present day remains an open question.

In a recent work, we show, using numerical simulations, that dwarf galaxies can grow just enough to slowly accrete fresh gas, eventually fueling the re-ignition of their star formation after a few billions of years. The generic nature of this uncovered mechanism predicts that many similar galaxies to Leo P and Leo T should exist and are waiting to be discovered by future, more sensitive instruments. These results caught the specialized press' attention, and will soon be communicated to the general public. 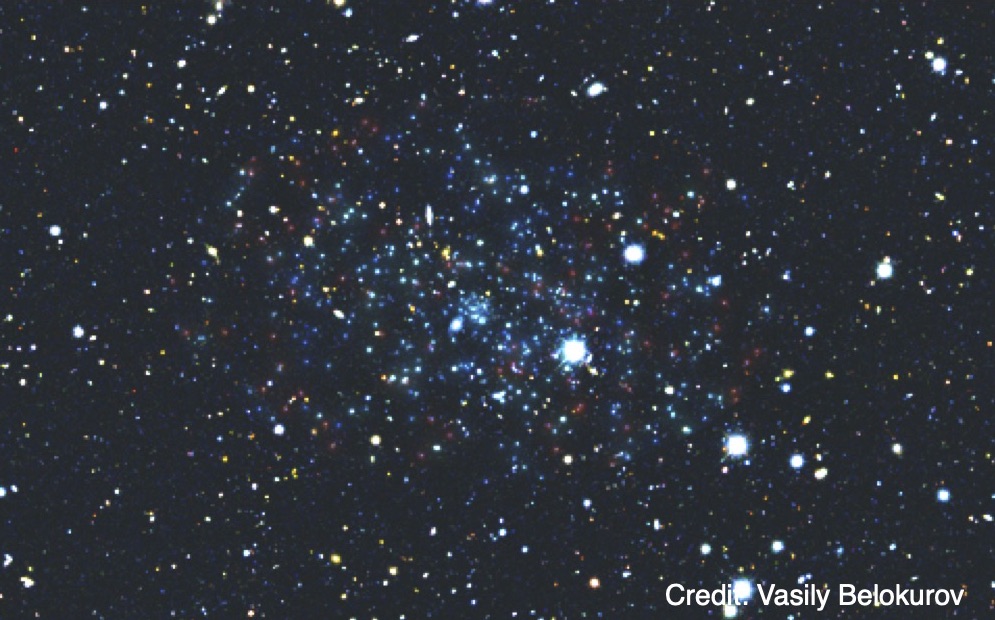 With improving instruments over the years, astronomers have kept discovering both fainter and more diffuse dwarf galaxies (such as Eridanus 2 in the above picture). These discoveries have constantly pushed back our understanding of how small, diffuse and faint a galaxy is allowed to be in our Universe.

In a recent work, we combine cutting edge numerical simulations of dwarf galaxies with a new approach, genetic modifications, to probe and predict the expected diversity in the masses and sizes of dwarf galaxies. Our simulations recover galaxies similar to currently observed ones, but also showcase the formation of very faint, highly diffuse dwarfs outside of the detection capabilities of current facilities. Despite our repeated efforts, our results predict that many more dwarf galaxies are yet to be discovered.

Genetic modifications: a new method to study the formation of halos and galaxies

Over the course of my PhD, I participated in the development of "genetic modifications", a new approach that allows us to modify specific aspects of a galaxy's cosmological merger history in a controlled way. This enables us to construct a causal account between a galaxy's history and its final observables.

I first strengthened the theoretical foundations of the method, and then implemented a new kind of modifications to target multiple mergers at once. Tools to construct and craft genetically modified initial conditions are now publicly available to the community. 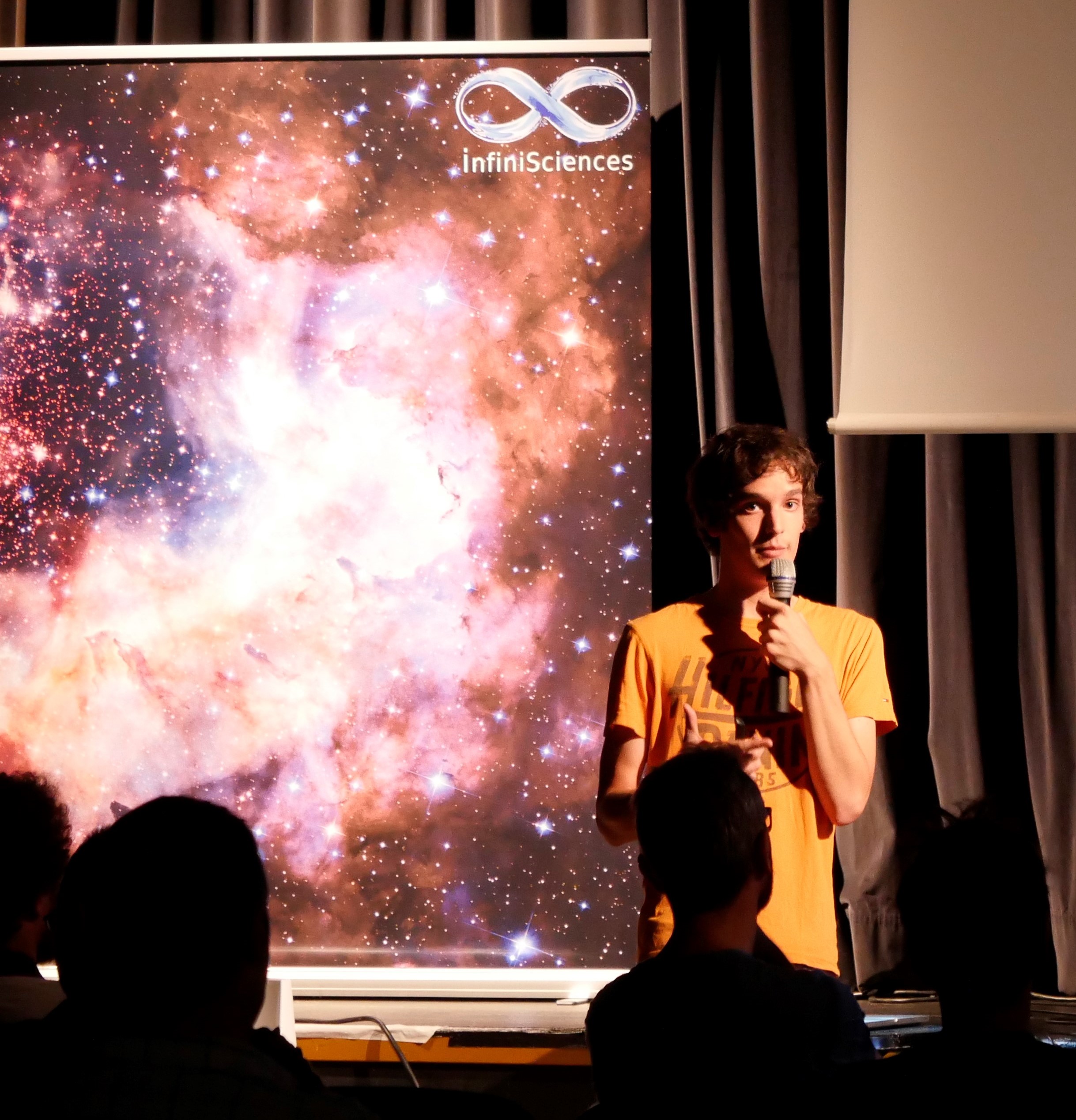 During summer 2018 in Auvergne, I participated to an astronomy festival organized in part by Nicolas Laporte. Beautiful sceneries and great weather (rare enough in this region) made the moon eclipse very enjoyable. It was a pleasure to contribute with a public lecture on dark matter, an interview on local radio and a 3-day summer school for children aged 6 to 15 years old. Once again, this was done in cooperation with this great group of friends, the Astro-jeunes society.

Re-opening of the KLB building at UCL 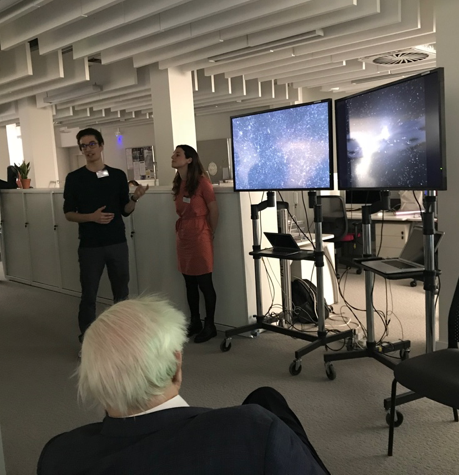 On April 2018, we officialy re-opened our new building at UCL (we moved in only 6 months ago). The main attraction was not the building itself but David Attenborough, living legend of the BBC, who gave an incredibly inspiring talk at 91 years old. We explained what our research was about and what the Universe is made off to him and a variety of high profile people. Quite an inspiring day !

I spend two days in May 2017 at the French High School , once again talking about astronomy and physics, to 13 years old children. Many different activities were organized by the astrophysicists of Astro-jeunes society, including visible, H-alpha and radio observations of the Sun, a planetarium and a “northern lights” simulator. 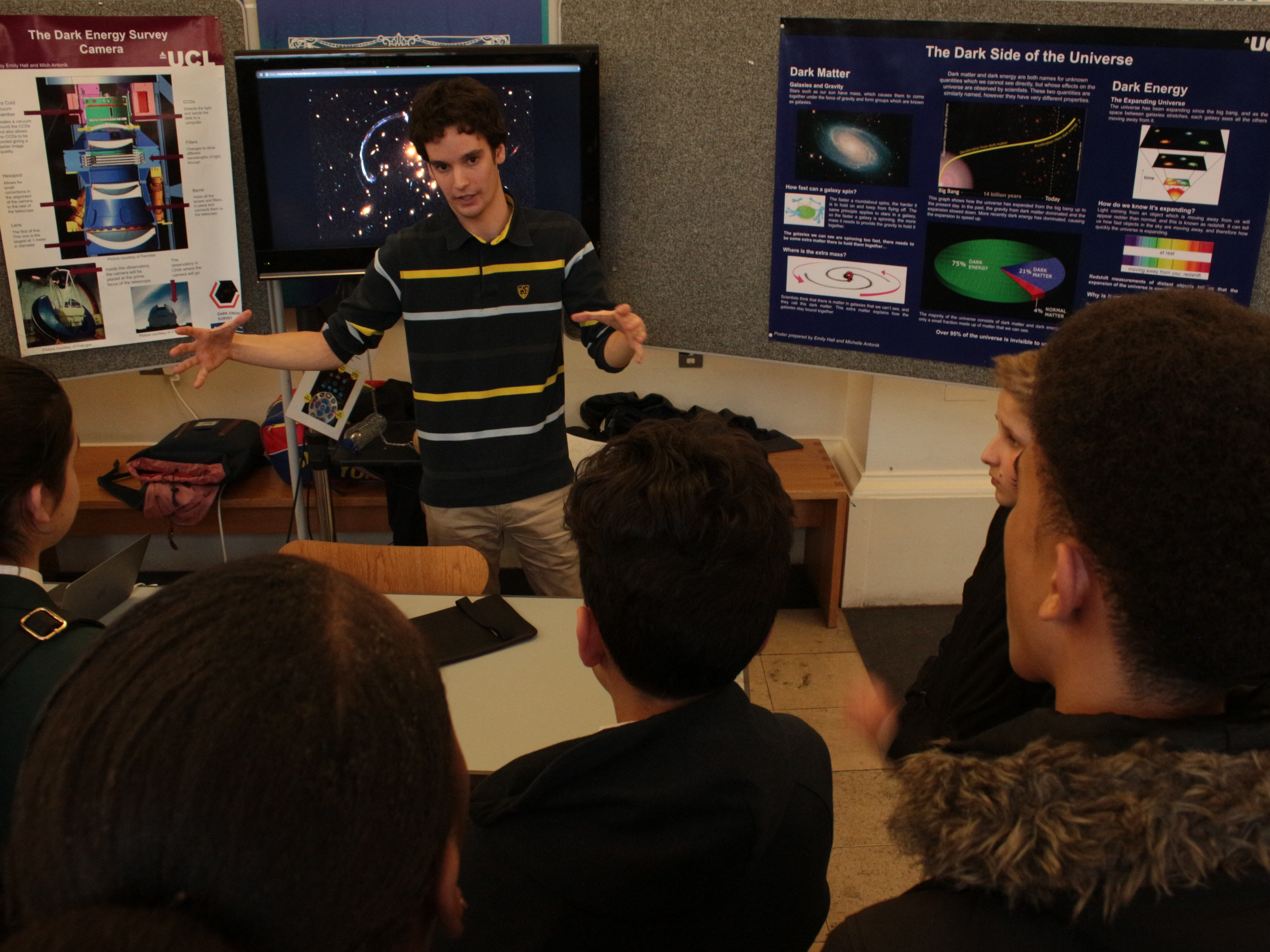 Over a week in March 2017, we welcomed over 500 pupils at UCL to learn about astronomy. The event is called Your Universe and is run every year. I was involved in the “Dark matter and cosmology” stand, explaining that most of our Universe is dark and the different methods of inferring that dark matter is there, such as gravitational lensing.

I actively participate in academic events, conferences and workshops to discuss recent results within astronomy and astrophysics. Following is a list of community events I have contributed to, by either presenting my results or helping to organize them. 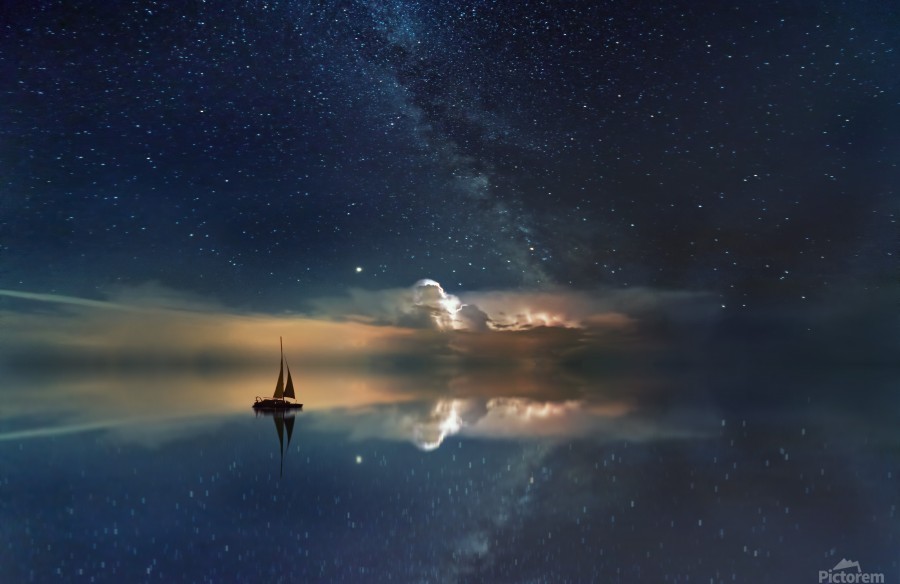 I am originally from France where I did most of my studies. I studied aerospace engineering at ISAE Supaéro in Toulouse (yes it is rocket science) where I learnt how to build spacecrafts including my own cubesat which has now been launched and is free floating in space.

Working within large space collaborations was not quite for me, so I joined the theoretical physics forces, first at Imperial College London with Jonathan Pritchard and afterwards on a PhD with Andrew Pontzen. I am now starting a postdoctoral position at Lund University working with Oscar Agertz. My CV contains a more formal description of my background and you can find a list of my papers on arxiv.

Finally, when I am not working, I tend to be at sea, not sleeping for a few days, and racing other sailboats far from the coasts. Sometimes we even win :)